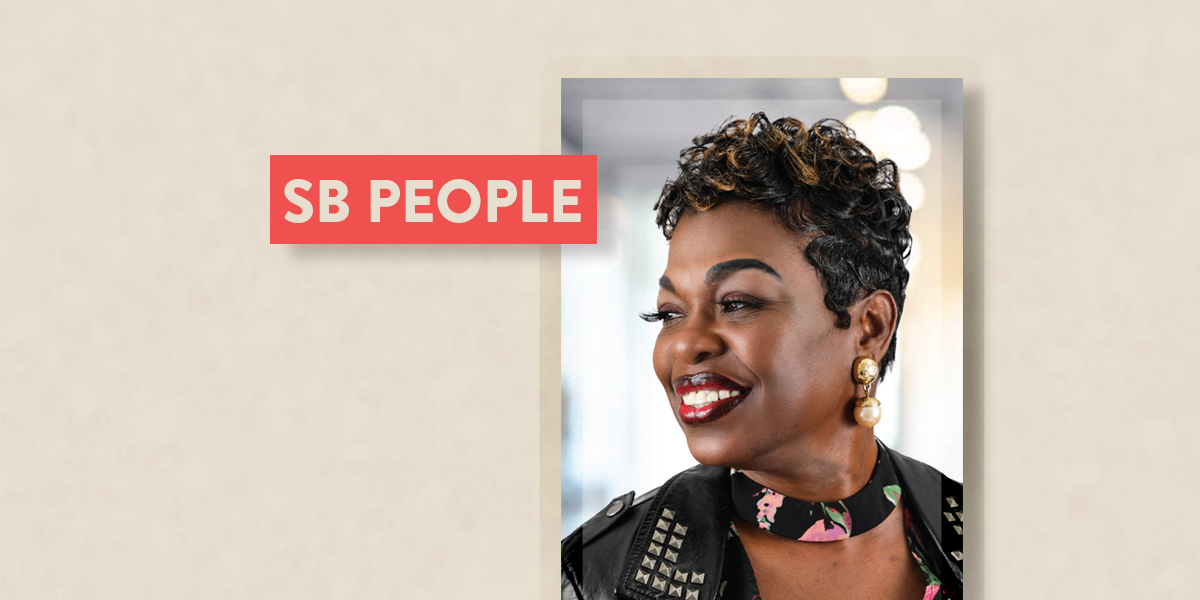 Monro Brown marches to the beat of her own drum. It’s a blues beat, but her outlook for Shreveport is not blue at all.

“This has been a journey,” Brown said of her life that has taken a few unexpected diversions. “But I try to keep a good attitude all the time. I’m learning that everyone is different. That’s what makes life interesting. It’s like a Louisiana gumbo.”

That is Brown’s approach to building a stronger community. Through her work with Community Renewal and her own non-profit organization, Seniors First, she seeks to span generation gaps by bringing seniors and young people together. “Seniors First is non-profit organization I founded to fill the gap between seniors and youth,” she said. “It reintegrates seniors into the community to sustain their cognitive ability. They become leaders in their own communities.”

Seniors First grew out of life-altering unexpected circumstances in Brown’s life. The Captain Shreve High School graduate earned a dual Associates degree in Accounting and Business Management from Southern University Shreveport in May 2017. She planned to move to Baton Rouge to continue her education, but her father, Lester “Knockout” Brown, died in February and her mother, Martha, eight months later, so she stayed in Shreveport.

“That’s when I started to realize there was a void in our community among our seniors,” she said. “I decided to do a case study, because I was really bamboozled by the fact that both my parents died in such a short time frame.” Her case study became the launching pad for Seniors First. Still, her initial goal was not to run a non-profit service organization.

“When I first started, I thought I was going to have a program every quarter,” Brown said. “Instead, it has turned into a developmental nonprofit. We react to things in the community. Whatever the community needs, we go out and get it.” “Shreveport is about families that have known each other for years. Seniors First taps into that for the benefit of community as a whole.” Brown is a case manager certified in trust-based relational intervention and crisis intervention.

Brown said her service as a Haven House leader for Community Renewal opened her eyes to a way both seniors and young people could find something they have been missing. “I saw a lack of authority in the community,” she said. “I see a lot of children who don’t identify the difference in themselves and adults. Instead of me trying to implement that connection, I decided to bring the seniors in. The youth are more comfortable with seniors giving guidance. “It helps seniors feel involved and combat loneliness and age- and death-related illnesses due to delayed access to transportation leading to isolation and depression. And there definitely needs to be some sort of pecking order today.”

“I would never disrespect my elders because that’s what I was taught. Today, we have other challenges. At Seniors First, we try to provide basic needs for the children.” And while Brown’s name is on the letterhead, she knows who’s in charge. “I am not the boss,” she said. “Those seniors will tell you, ‘No, you can’t do it that way.’”

“The seniors are a lot more patient after all they have gone through in life,” she said. “The children just need something that you can’t see — that’s love. And the seniors give it to them openly. Children and seniors have lots of common emotional needs. The seniors provide legacy to the children by teaching them things.”

Uniting the community is Brown’s passion, but Seniors First is not her only tool. She is equally passionate about bringing people together through her love of music, which started in childhood. Brown grew up singing in choirs and performing in Caddo Parish schools and at church. Her extensive formal training including competing in state festivals. Back then, Brown saw it as her road to the top.

“I thought I could make it right after high school, without a lot of college,” she said. Stage fright diverted her from the spotlight, at least for a while. But in 2010, she collaborated with Ron Johnson of the band Windstorm and his sons B.J. and Alex to produce an album titled “Reality Check, No Free Rides.” The album was nominated for three Just Blues awards, alongside Denise LaSalle and Millie Jackson. She was opening concerts for Latimore, Bobby Rush, Calvin Richardson, and others. She also got involved with the local arts community, performing at Christmas in the Sky and other local festivals, as well as fellowship and writing grants.

She hit another bump in the road when Vicky Marshall told her she should work on building her portfolio. “I was like, ‘Excuse me?,’” she said. “I was a little insulted. I had met B.B. King and opened for Bobby Blue Bland. I had been nominated for awards. While all those things counted, they really didn’t count in the ways I thought they did.”

Brown realized she did not speak the language of the business side of the music industry. That’s when she decided to pursue a college degree. And while life changed her plans, she eventually completed her education online in 2019 through Southern University in Baton Rouge, receiving a Bachelor of Science in Interdisciplinary Studies and Psychology. She also learned something else along the way. “Face-to-face classes aren’t always the best solution, because you don’t get a chance to become digitally advanced,” she said. “It was tough, because I felt like everybody expected me to fail after I lost both my parents. I was out to prove to myself I am not going to fail. College taught me patience with people. It taught me how to ask why and how to do research. It opened my eyes. I don’t point my finger as much anymore.”

Music and the arts remain integral in Brown’s life. She has some local projects in the pipeline and is working on a web-based program on the Houston Live TV Network, interviewing movers and shakers in the music industry, like producer Ronald “Slack” Jefferson and global songwriter Michael Garvin, who is a Bossier City native.

Brown believes music and the arts are integral to a strong community. “Music is the core of everything,” she said. “Everybody has a song. Music is a great way to express yourself. Music is therapy. Music is always going to be there. I think we need more arts here. It gives people an opportunity to redefine or find themselves.”

And building a strong community is essential to Brown. “A lot of the things happening here I am concerned about because I have children and grandchildren here. I do care about what goes on here, no matter where I may go. My support system is here. It’s important to me to try to make some changes here. Hopefully, as I follow the example of my leaders, others will follow my example.”